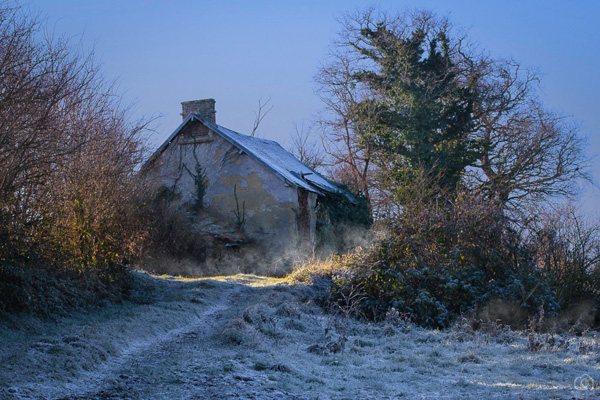 One gloomy, cloud-covered day in the small town of Callahan, a tree sprite leapt out in front of Auntie Yolanda. It chittered angrily in treespeak, waving twig arms like an orchestra conductor. It obviously had some urgent need, a warning of some cosmic event that might shatter the world.

Auntie Yolanda rolled her eyes and walked right past it.

She was too old for this sort of nonsense. She was pushing sixty now, battered mentally and physically by years of conflict. She didn’t fancy fighting an oil bogle today, or a mirror bogle, or any bogle, really.

The sprite wobbled after her, legs flailing like thin stilts. It stood to her knees, and no one else could see it — at least, no one without Gaia’s blessing — but Auntie Yolanda was certain it would give up soon. How it had managed to keep a single thought in its head for even this long spoke of its urgency.

The sprite still followed when she reached her modest little home, or not her home, precisely. It was a pleasant single-story with a decently maintained lawn and a picket fence. This was a common house available to all who served Gaia, but Auntie Yolanda was currently its only occupant.

She had come to Callahan to get away from the endless war between Gaia and the bogles who plagued Gaia’s children. She had come to end her years playing Bingo, and watching returns, and feeding stray cats. An ordinary life for an ordinary woman.

Yet Auntie Yolanda was not ordinary, and this sprite sensed that. It whooshed into the home like a falling leaf. It wouldn’t stop chittering, and eventually, Auntie Yolanda knew, she would have to do something about that.

She put a kettle on the stove. She sat and read today’s paper as the tree sprite wobbled about on her table, relating harrowing tales. Once the kettle whistled, Auntie Yolanda poured herself some tea, flavored it with honey, and sat on the worn orange couch. The cushions were covered in cat hair.

The chittering began again, and this time, Auntie Yolanda listened. She tuned out the sounds of the real world and listened for the world beneath it, the secret world that existed beneath what everyone else could see. She nodded, and grimaced, and took one more sip of her honeyed tea.

“Well,” Auntie Yolanda said. “That certainly is an emergency.”

The tree sprite chittered something snarky at her.

“Settle down, little one.” Auntie Yolanda sipped her tea. “Just let me finish this cup.”

They had time. She would call a taxi, because Callahan was big for a small town.

The taxi arrived twenty minutes later, long after her tea was done. The cabbie, a large man with a big smile, greeted her with a wave and a “How’s your day been?”  Auntie Yolanda offered only a token pleasantry before stating her destination and staring out the window.

The tree sprite hopped in beside her — it was a surprisingly single-minded little thing — and they drove across town to Sadie Parker’s sagging white rancher. It was one of several houses off Service Road 80, a path untraveled by most. It was closer to nature than any house in Callahan, which explained things.

“This the place?” her cabbie asked.

“No.” Auntie Yolanda stepped out into the cold and drizzle. “Have a safe trip home, young man.”

Floors creaked, and then the door opened a crack. A frazzled woman who looked to be in her mid-thirties peeked past the door chain. “Yes?”

Auntie Yolanda smiled and breathed out Gaia’s breath. “Your daughter is very sick.”

Sadie Parker’s mother stiffened when Auntie Yolanda said that, but only for a moment. Gaia’s breath was a powerful relaxant. Soon enough, the younger woman unchained her door and invited Auntie Yolanda inside.

“I’m Jessica,” Jessica Parker said, in a way that implied she wasn’t quite awake just now. “And yes, poor Sadie has been ill for the past few weeks. We’re saving for a doctor visit.”

“Is she in her room now?” Auntie Yolanda asked.

“Okay.” Jessica led her down the hall with slightly drunken steps.

The tree sprite knew the way, obviously, yet it hesitated outside Sadie Parker’s door. It bounced from stilt leg to stilt leg, chittering angrily. A bogle drunk off a child’s energy would be sluggish in the daytime, unlikely to stir for a tasty tree sprite, but the tree sprite couldn’t be sure of that. The fact that it would wander this close to its primary predator told Auntie Yolanda just how much it loved Sadie Parker.

“Could you get me a glass of water, dear?” Auntie Yolanda asked.

“Of course,” Jessica said. They both waited.

“Yes.” Jessica turned slowly. “I’ll see if I can find some ice.”

Auntie Yolanda took a moment to center herself before bracing what waited inside. She traced the tiny ley lines stitched into her wrinkled palms with her thumbs. She traced glyphs of protection on her heart, mind, and loins. She stepped into the darkened bedroom and wrinkled her nose at the stench.

Normal people couldn’t smell a bogle, but people like her couldn’t stop smelling them. Its stench was an ancient stench, like pitch bubbling in a methane swamp. Sadie Parker’s eight-year-old form breathed fitfully in her little bed, covers pulled to her chin. Her eyes twitched, and sweat rolled down her brow.

Auntie Yolanda stood silently and let her eyes adjust. Once the room was twilight, she swept its length for possibilities. It was obvious the Parkers didn’t have much, but what they had, they spent on their daughter. Stuffed animals had no wood in them, so those were out. The xylophone had wood, but not enough, and though the desk and chair seemed perfect, those were too obvious for a crafty bogle.

Her eyes fixed on the wooden monkey atop Sadie’s tall bookshelf, a battered representation of See No Evil. Hear and Speak were missing. It was likely Sadie found the monkey while walking, or riding her bike, or in her backyard. That was how bogles entered a home, as innocuous objects discovered by chance.

Its hateful mind shrieked into hers before Auntie Yolanda could glyph anything.

She gasped as the bogle’s unexpected attack tore open her surface thoughts. It wriggled about inside her head, lashing out madly at memories of Auntie Yolanda’s own daughter, and her dead husband, and her parents and friends. It, too, could smell Gaia’s blessing, and that smell made it vengeful and mean.

Auntie Yolanda took a step as her head pounded. She took another as her palms bled. She felt her heart slow and her lungs swell, but she kept walking. This old body still had a few years of fight left.

She fell to her knees at the bookshelf, glaring at See No Evil. The boggle taunted and tormented her, just out of reach. She pulled herself up with a trembling arm. She stretched out one hand as the bogle chewed on her good memories, polluting, corrupting, distorting.

One of her bleeding fingers glowed green. When she touched the wooden monkey, it vanished with a hellish shriek. The smell vanished.

Auntie Yolanda collapsed against the bookshelf, sucking in deep breaths. So much for pushing sixty. She felt at least seventy now. Maybe seventy-two.

Jessica Parker entered the room and gasped. She hurried over, water in hand. “Are you all right?”

“I’m fine, dear.” Auntie Yolanda glanced at Sadie Parker, who breathed evenly in her bed. “I’d like that water now, if you don’t mind.”

Jessica handed it to her. Auntie Yolanda drank. When she was done, she handed the empty glass back and watched the tree sprite climb into bed with the little girl it loved.

“When she tells you about the little sprites who live here,” Auntie Yolanda said, “believe her.”

“How did you…” Jessica blinked. “How do you know about her imaginary friends?”

“They aren’t imaginary,” Auntie Yolanda said, “any more than I am. When Sadie turns fourteen, send her to 10 Roanake Way, across town. I’ll be waiting. I’ll teach her everything.”

Our theme for the month was urban fantasy, and  naturally, my mind immediately went to my favorite urban fantasy to this day, Running with the Demon by Terry Brooks. This story takes a great deal of inspiration from that book and that world. While I haven’t written any real urban fantasy (yet) it was a fun exercise and feels like a world I might want to revisit some day.

One thought on “Gaia’s Child”